In June 2019, the Southern Nevada Health District declared an outbreak of hepatitis A cases in the community. As of December 31, 2019, there were 100 cases reported as part of the outbreak. Although the Health District is not ready to declare the outbreak is over, the number of cases continues to decline. Hepatitis A immunization outreach activities are continuing as part of our response. For updated statistics about hepatitis A cases, please visit our Statistics, Surveillance and Reports page.

Hepatitis A Information and Resources 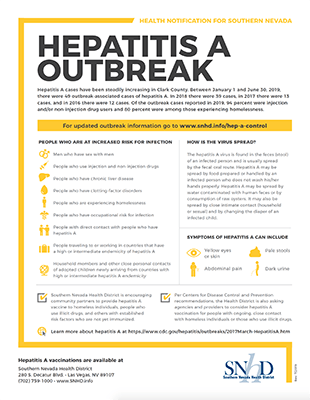 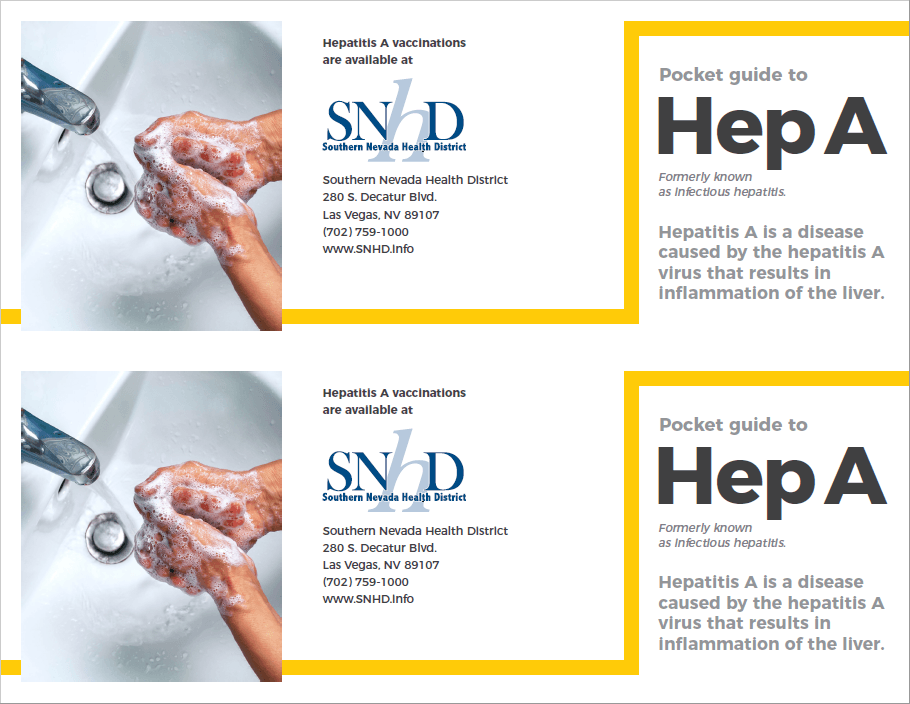 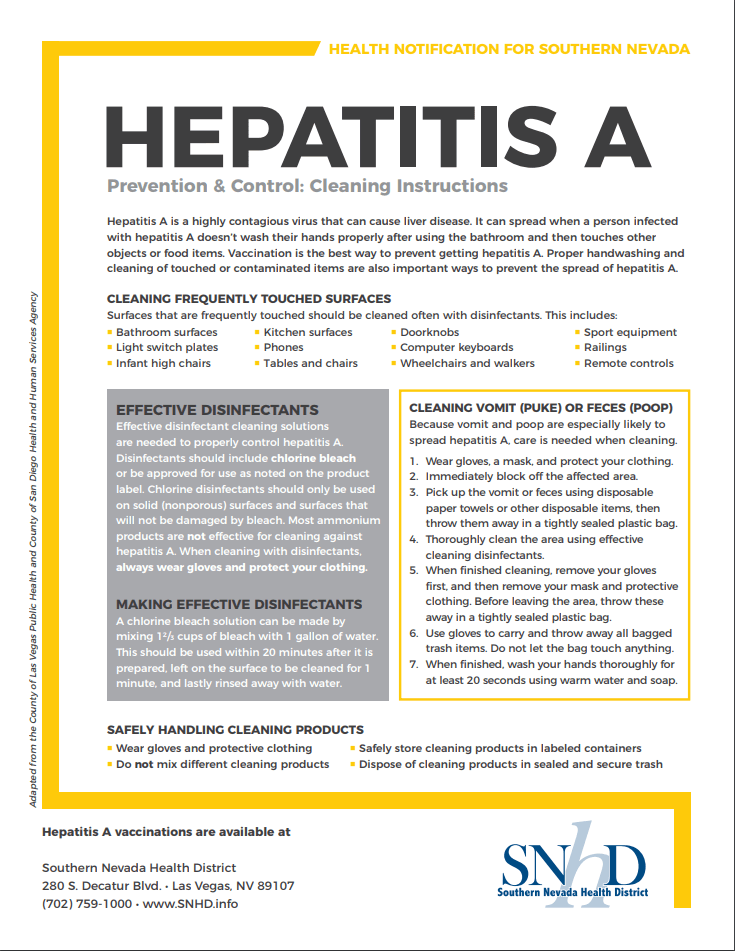 Protect Yourself
From Hepatitis A 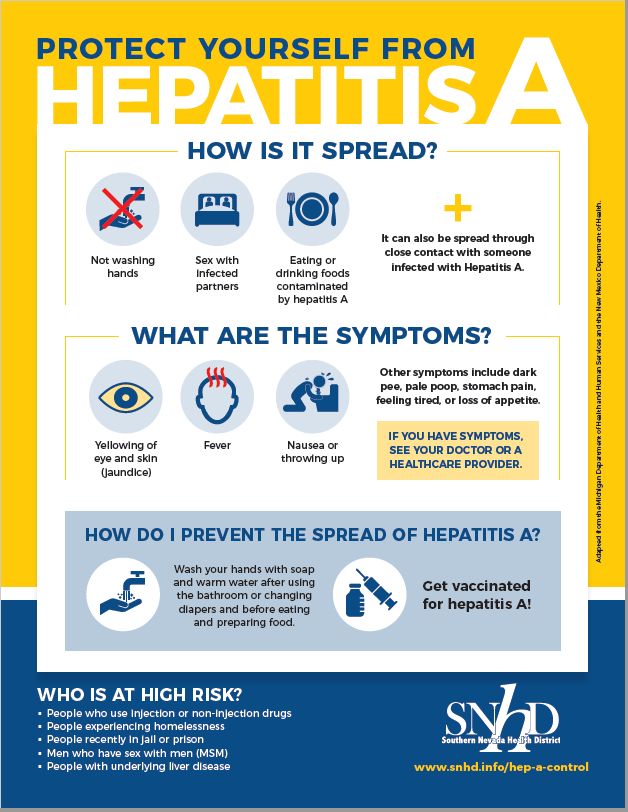 Protect Yourself From Hepatitis A 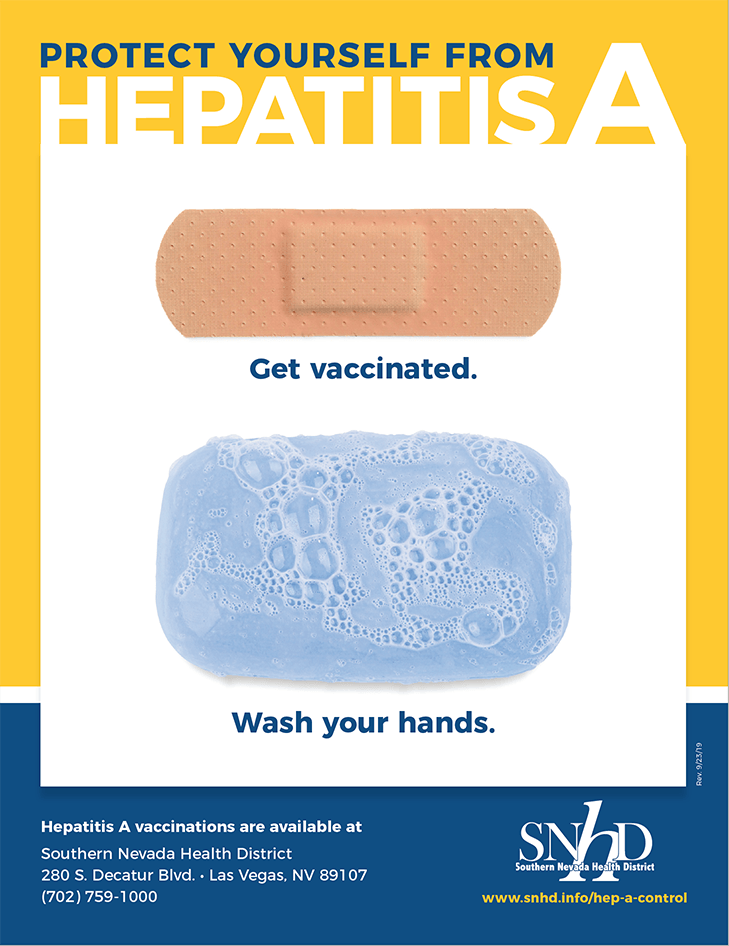 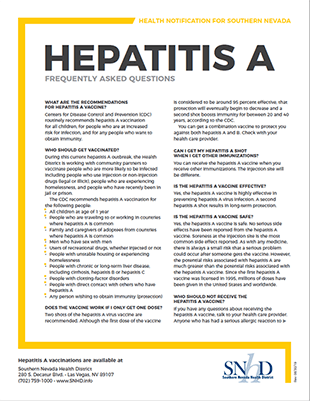 Thank You –
From Dr. Fermin Leguen

The Health District first reported the hepatitis A outbreak in June 2019. Nevada was one of more than 30 states that experienced an outbreak of hepatitis A associated with person-to-person transmission since 2016. Through case investigation and contact tracing, it was determined the first case associated with the outbreak in Clark County developed symptoms in November 2018. Over the course of the outbreak, there were 107 outbreak-related cases, 94 hospitalizations, and one death.

The Southern Nevada Health District has identified a person with hepatitis A that worked at a 7-Eleven convenience store located at 2910 S. Maryland Parkway, Las Vegas, NV 89109 (Maryland Parkway and Vegas Valley Drive) while they were potentially infectious to others.

Hepatitis A outbreak cases increase to 83 in Southern Nevada

In June, the Southern Nevada Health District announced Clark County was experiencing an outbreak of hepatitis A cases. Since November 2018, the Health District has reported 83 outbreak-associated cases of hepatitis A. In the past few years total cases reported have been significantly lower: 39 cases reported in 2018; 13 cases in 2017; and six reported cases in 2016. People who are at increased risk for infection include people who use drugs and those experiencing homelessness. Of the reported cases, more than 92 percent were people who used drugs (injection or non-injection), and more than 80 percent were among people experiencing homelessness. Weekly hepatitis A outbreak updates will be available on the Health District website at www.SNHD.info/hep-a-control.